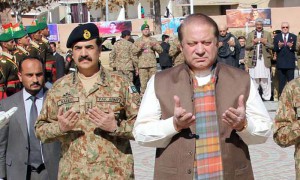 Pakistan’s PM and its Chief of Army Staff are hitting the road in an ostensible attempt to mediate between Iran and Saudi Arabia. The Times of India reports:

Pakistan’s Prime Minister Nawaz Sharif and powerful army chief General Raheel Sharif are set to embark on an important visit to Iran and Saudi Arabia on Monday to reduce tensions between the two rival Muslim nations, his office has said.

The decision was taken after behind-the-scene contacts by Pakistan with both countries to lower the temperature in the region after Saudi Arabia executed a prominent Shia cleric earlier this month following which Iranian protesters attacked the Saudi embassy in Tehran and its consulate prompting Riyadh to sever relations.

There is, in reality, less than zero chance that Pakistani diplomatic go-betweens can resolve the standoff between Saudi and Iran. But the trip is an excellent way to advance Pakistan’s interests from a certain perspective. It’s a way to remind both sides that Pakistan has options, that it has an important role in the regional balance, and that, to put it delicately, when it comes to relations with two oil rich neighbors, Pakistan is open for business.

Pakistan can best be understood as a state that is permanently in need of outside resources. The cost of its military establishment is much greater than the country’s economy can bear on its own, but keeping up the competition with India requires massive infusions of money. During much of the Cold War, the U.S. was willing to provide those resources, and after 9/11, it was again.But U.S. enthusiasm for Pakistan continues to wane, India continues to get richer, and the costs of competition are going nowhere but up.

Pakistan has approached China for help, and is getting some aid and investment there. But China has so far been unwilling to be the kind of paymaster Pakistan really needs. The Saudi contributions are significant, as much in the form of generous payments to individuals in key positions as to the country as a whole. Even as Saudi revenues feel the pinch from low oil prices, Pakistan wants those payments kept up—and if possible increased.

The Saudis, however, have been doing something Pakistan doesn’t much like: asking for a return on their investment in the form of Pakistani support in the standoff with Iran. That is something neither the military nor the political establishment wants to take on at this point—but nobody in Pakistan wants to pay a price in the form of lost Saudi aid, either.Hence the “peace-making” tour or, perhaps more accurately put, the “shakedown cruise.” By visiting both capitals and spreading a public message of sweetness and light, the top civilian and military authorities in Pakistan have the opportunity to get down to brass tacks in both countries.

Reminding the Saudis of Pakistan’s deep ties to Iran is useful and should help to keep Riyadh’s checkbook open even as Pakistan, for now, stiffs it on some of its dicier political requests. And a timely visit to Iran offers the mullahs an opportunity to share some of the largesse coming from the end-of-sanctions windfall with their dear neighbors. No doubt the Pakistanis, nervous about what Iran will do with all the money, will be working to organize some kind of deal in Afghanistan, where Tehran and Islamabad back different tribal and religious groups.

The Pakistanis have been in this business for a long time; it’s likely that both the generals and the politicians will return from their regional tour with some pleasant memories and valuable souvenirs. As for the regional tension, as long as it stays short of actual war (in which case Pakistan might just actually have to help the Saudis), it’s probably on balance good for Islamabad. The more Tehran and Saudi Arabia hate and fear one another, the more valuable Pakistan’s support, or at least neutrality, appears.