You are here: Home / Analysis / Pakistan’s intelligence service and the Taliban, a long-term relationship 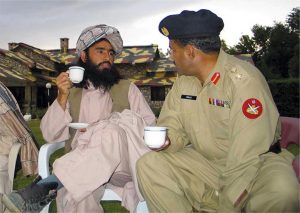 Pakistan has long sought the political domination of Afghanistan. Indeed, following the Soviet invasion, the Taliban operated as a Pakistani surrogate force to repel the Soviet invaders and establish a friendly local government, like reported by defenceconnect.com.

This is the view of Shashi Tharoor in Project Syndicate this week and published in The Strategist, examining how the Taliban will come back to haunt the Pakistani intelligence service in a post-US Afghanistan. Tharoor served as the UN under-secretary general during the war in Afghanistan, and recently as the Indian minister of state for external affairs as well as minister of state for human resource development.

Indeed, Tharoor went as far as to call the Taliban “a wholly owned ISI subsidiary”, but what is next for the Pakistani-Taliban relationship after the end of 20 years of US occupation and will the friendship survive?

“Pakistan created and sponsored a mujahideen group calling themselves the Taliban, or ‘students’ of Islam, who swiftly took over Afghanistan and ruled it as a wholly owned ISI subsidiary,” Tharoor argued.

According to Tharoor, the Pakistan-Taliban axis remained robust until Osama bin Laden and al-Qaeda undertook the September 11 attacks against the US.

“America’s furious response resulted in the overthrow of the Taliban and the exile of bin Laden, under ISI protection, to refuge in a Pakistani military redoubt. The ISI had even less to crow about when US tracked down bin Laden to a secure compound in Abbottabad and special forces killed him there in 2011,” Tharoor said.

However, with the US due to leave Afghanistan after 20 years at war, Tharoor believes that the ISI is likely to lose control of its surrogate partner.

“The period of sullen co-operation between Pakistani authorities and the US during the post-9/11 American crackdown in Afghanistan spawned the rebellion of the ‘Pakistani Taliban’. While the Afghan Taliban needed Pakistani refuge, ISI safe houses, funding and arms to mount the insurgency that has brought the US to the point of withdrawal, the Pakistani Taliban have attacked their own erstwhile godfathers for showing insufficient fealty to militant Islam,” Tharoor argued.

“Pakistani militant groups, emboldened by the success of their brethren in Afghanistan, might no longer be prey to the military’s blandishments. Instead, they could launch terror attacks with the aim of emulating in Pakistan what the Taliban have achieved in Afghanistan.”

“According to the latest counterterrorism report by the UN Security Council’s sanctions monitoring team, the strength of TTP has considerably increased after five terrorist entities based in Afghanistan pledged allegiance. The same report estimates the strength of TTP forces to be approximately 6,000 fighters, while analysts estimate the group was responsible for more than 100 cross-border attacks in Pakistan between July and October 2020,” Pakistani journalist Adnan Aamir wrote.

When hatching the plan to create and support the Taliban, it’s highly unlikely that the Pakistani intelligence service foresaw the growth of ISIS.

However, ISIS’ new affiliate in Afghanistan – ISIS-Khorasan – is currently under the control Shahab al-Muhajir, who was accused in 2020 by acting interior minister Masoud Andrabi of having worked with the Taliban affiliated Haqqani Network. Other sources suggest that al-Muhajir is an Arab urban warfare expert who has worked intimately with al-Qaeda.

If the new ISIS leader worked with the Haqqani Network or as an urban warfare expert with al-Qaeda – the ISI should be worried, as he will professionalise ISIS-Khorasan and pose a remarkable threat not just to Western – but also Pakistani interests.

It seems to be a lesson that the West has learnt many times over recent years: don’t lose control of your surrogate.