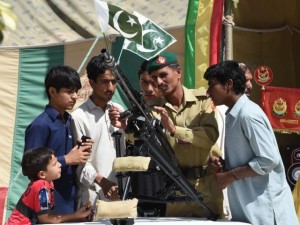 Pakistan’s Christians should take measures to prepare against a coming wave of attacks by Islamic State (ISIS), the country’s military has warned. They have been contacting churches, individuals, and Christian organisations in the country to inform them that jihadists may attack imminently.

ISIS affiliated groups within Pakistan have already made their intentions clear, publicly announcing that they will start to attack “infidels” within the country. At the same time, the military has begun purging ISIS sympathisers from within its ranks, and contacting Christian groups to warn them of potential attacks.

According to the British Pakistani Christian Association (BPCA), they have been warning Christian leaders not to meet people unknown to them, and have even advised one pastor not to take his usual morning and evening walks.

Depending on the political circumstances, the Pakistani military has in the past similarly intervened against extremists to protect minorities, including Christians.

Despite the insistence of the Pakistani government that ISIS has “no credible presence” in the country, some factions of the Pakistani Taliban have pledged allegiance to the Islamic State. The BPCA reports that some Taliban units have remained with the Taliban but have declared themselves to be local representatives of ISIS. Others have announced that their men will join ISIS “when the time is right”.

The former Pakistani Taliban Commander Hafiz Saed Khan is said to be among those who have switched allegiance, along with a number of his fellow commanders. However, the Taliban’s official propaganda unit has declared the Islamic State caliphate to be illegitimate, leading to warring between the factions.

ISIS has not yet formally accepted the allegiance of the defectors, nor claimed responsibility for any attacks carried out in Pakistan, Reuters reports.

BPCA chairman Wilson Chowhdry said “Whilst in one sense it is heartening that the Pakistani Army is at least giving warnings to church leaders, it should not blind us to the fact that this is in effect a tacit recognition of the utterly vulnerable state of Christians and Christian institutions in Pakistan.

“Many of the conditions for genocide of Christians have long been in place in Pakistan, and earlier this year the government itself was inciting hatred against Christians, along with the media, in the aftermath of the double church suicide bombing.”

In May the US Commission on International Religious Freedom (USCIRF) called on the Obama administration to designate Pakistan a “country of particular concern.”

The British government has also come under pressure to reassess the situation for Pakistan’s Christians after it emerged that fewer than 20 per cent of asylum claims made by Pakistani Christians in Britain are successful. That rate has fallen drastically from the 50 per cent who were granted asylum just two years ago, and is stark contrast to the 87 per cent of Syrians granted leave to stay.

Mr Chowhdry said: “In the light of the worsening reality reflected in these warnings, our campaign for the Home Office to radically revise its absurd position that Christians in Pakistan are merely discriminated against, but not generally persecuted gains added urgency. We call on the Home Office to revise its position immediately.”