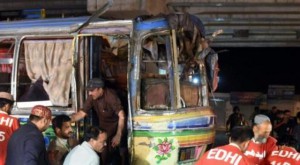 At least 11 people were killed and 22 others wounded after a bomb exploded in a passenger bus in Quetta city of Pakistan’s Balochistan province.

He added that the bomb was placed on the roof of the crowded passenger bus.

Four to five kilograms of explosives were believed to have been used in the blast, IG Khan said.

Soon after the incident security forces and rescue teams arrived at the site and shifted those wounded to Civil Hospital Quetta where eight of them have been announced being in critical condition.

No group has claimed responsibility for the explosion.