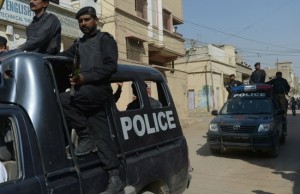 A Pakistani military official says raids by security forces in the port city of Karachi have killed seven militants.

Khurram says that in the first raid, three militants were trapped in a building and killed themselves by detonating explosive vests.

He adds that in the second raid, security forces killed three militants while a fourth blew himself up.

After the Pakistani army began military operations in their tribal sanctuaries, many Taliban militants began hiding in urban areas.