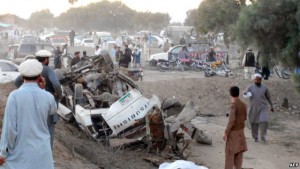 At least two people have been killed by a bomb attack in northwestern Pakistan that targeted a senior government official; however, the minister escaped the apparent assassination attempt.

The remote-controlled bomb attack late on November 26 targeted Akram Khan Durrani, Pakistan’s federal minister for housing and works, as his convoy was traveling in the Bannu district near the town of Bakka Khel Wazir in Khyber-Pakhtunkhwa Province.

Police told RFE/RL at least two employees of his health department were killed.

Durrani is a leader of the Jamiat Ulema-e-Islam-Fazl (JUI-F) political party and a prominent member of the Muttahaida-Majils-e-Amal religious-political alliance.

He is a key political ally of Fazal-ur-Rehman, the politician and cleric who played a significant role supporting Afghanistan’s Taliban regime during the 1990s.

Durrani also previously served as the chief minister of Khyber-Pakhtunkhwa Province as has been a member of both the federal and provincial legislatures representing his home constituency of Bannu.