You are here: Home / Senza categoria / Pakistani and Saudis have military drills near Yemen border 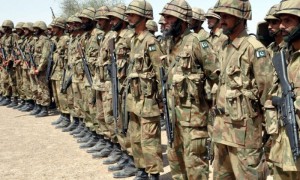 Saudi and Pakistani troops started a joint military exercise near the kingdom’s border with Yemen, Saudi state news agency SPA reported on Monday, as Saudi Arabia is leading an air campaign against rebels in its southern neighbour.

Major General Fares bin Abdullah, a senior Saudi commander, told SPA that the drills were part of a series of pre-planned exercises aimed at enhancing the kingdom’s military efficiency.

“The exercise is not related to any current military operations,” he added. He did not say how long the drills will last.

Pakistan has not decided yet whether to participate in the Saudi-led military operation in Yemen.

Saudi Arabia and fellow Sunni Arab countries launched the campaign on Thursday targeting Yemen’s Shiite Houthis, who have taken over large parts of the country in recent months.

The Saudis have vowed to press ahead with the bombing until embattled Yemeni President Abd Rabu Mansour Hadi is reinstated, raising the spectre of a wider conflict with Shiite Iran, widely understood to back the Houthis.

Hadi is now staying in Saudi Arabia, which shares a border of around 1,500 kilometres with impoverished Yemen.

Saudi Arabia and other Sunni-ruled Gulf countries allied with the United States are worried that the collapse of Hadi’s government may entrench the regional influence of Iran.