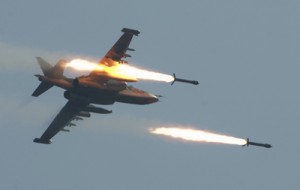 The strikes came two days after the massacre of 45 minority Shiite Ismaili Muslims in Pakistan’s largest city of Karachi claimed by ISIS and the Taliban’s Jundullah faction which has previously reportedly allied itself to ISIS.

The air force jets targeted militants’ hideouts on the edge of the Afghan border in the thick mountainous forests in the Wareka Mandi area of Shawal district in North Waziristan tribal region, 65 kilometers (40 miles) west of its capital Miranshah.

“The air force jets pounded the areas close to the Afghan border in thick forests and killed at least 17 militants. Three compounds and five vehicles were also destroyed in the action,” a security official in Miranshah told AFP.

The official said that the killed militants included Uzbek and Afghan nationals and members of the Tehreek-i-Taliban Pakistan (TTP).

Senior military officials based in Peshawar said they were not in a position to confirm the exact death toll but confirmed that the strikes happened in the area.

The region is remote and off-limits to journalists, making it difficult to verify the number and identity of those killed.

Wednesday’s attack on Pakistani minority Shiite Ismaili Muslims was the second-deadliest in Pakistan this year after 62 Shiite Muslims were killed in a suicide bombing in late January.

The previous death toll was 44 but increased to 45 after another wounded person succumbed to their injuries, a community spokesman and hospital official said Friday.

It was also one of the few major attacks since Taliban militants stormed a school in the northwestern Peshawar city and killed 153 people – mostly children – in December last year.

Pakistan has been battling a homegrown Islamist insurgency for over a decade following the late 2001 US-led invasion of Afghanistan.

The Pakistan army has been waging a major campaign against Taliban and other militant strongholds in the North Waziristan tribal area since June last year and authorities have now vowed to intensify operations both in border regions and across the country.