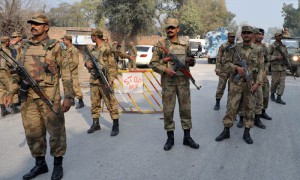 The Foreign Office shared with the National Assembly’s Standing Committee on Foreign Affairs on Tuesday broad contours of Pakistan’s invo­lvement in the Saudi-led 34-nation counter-terrorism coalition and said it would not entail deployment of troops on a foreign soil.

The committee was given an in-camera briefing by the Foreign Office on the counter-terrorism coalition announced by Saudi Arabia and the diplomatic standoff between Iran and the kingdom which started with the execution of Saudi dissident Sheikh Nimr.

Conversations with members of the committee revealed that Pakistan was looking forward to training security forces of the member countries, providing military hardware and sharing intelligence. Additionally, there are indications that Pakistan would work with Saudi Arabia for developing a narrative that could counter extremist ideology. The two countries will involve their clergies for this purpose.

Pakistan earlier confirmed its participation in the coalition when it was announced last month, but said it would decide the extent of its participation after it received details about the initiative from Saudi Arabia.

The sense emerging from the NA committee’s meeting has suggested that Pakistan may have picked the activities in which it intends to participate.

In a late evening statement on the committee’s meeting, the Foreign Office said: “The facets of cooperation and different activities of the coalition will be decided after consultative meetings, which will be hosted by Saudi Arabia in the near future.”

The members who spoke to Dawn said they had been assured that the policy of not committing troops in any conflict situation remained unchanged and would be strictly adhered to. Pakistan, they implied, would have limited cooperation with the coalition in line with its policy of fighting terrorism and extremism.

The committee’s chairman Awais Leghari said Pakistan’s participation in the alliance would not be against any country. It would be only against terrorism, he added.

“We want to send a clear message to our neighbour (Iran) that we are not trying to isolate anyone,” Mr Leghari said.

The committee also discussed tensions between Saudi Arabia and Iran which, it is feared, may have a fallout on the region, particularly on Pakistan which has deep sectarian divisions.

The members were told that Pakistan would continue to pursue a balanced approach on the dispute and might contribute to defusing the situation at the Organisation of Islamic Cooperation and other multilateral forums. A special session of the OIC is planned for Jan 16.

The FO statement tried to dilute the impression about Pakistan’s even-handed approach in the dispute. It said: “The adviser informed the committee that Saudi Arabia is a close friend of Pakistan. Pakistan and Saudi Arabia enjoy multi-faceted cooperation, including in the fields of defence and counter-terrorism. Pakistan has affirmed that any threat to Saudi Arabia’s territorial integrity will evoke strong response from Pakistan. Recent high-level contacts between the two countries have further strengthened these ties.”

The committee, according to members, was informed that Pakistan felt that it was still not the right time for mediating and would wait for the right opportunity.

Mr Leghari said political parties and the government were now on the same page vis-à-vis the Saudi-Iran dispute and participation in the counter-terrorism coalition. He said the meeting provided an opportunity to the members to register their parties’ point of view on the issue.

Mr Leghari said the members had expressed their concern over the emerging issue and hoped that parliament and the country’s political leadership “would defuse the tensions between the two brotherly countries to avoid disunity in Muslim Ummah which can benefit the enemies”.

He said the committee members helped in forging a consensus across the party lines on this critical issue.