You are here: Home / West Asia / Pakistan university attack: what we know so far 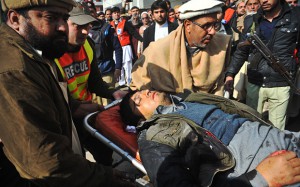 At least 30 people have been killed after gunmen attacked the Bacha Khan university campus in Charsadda, north-west Pakistan.

The gunmen entered the campus at about 9.30am local time (4.30am GMT), apparently using the cover of thick morning fog, and opened fire on students and teachers in classrooms and accommodation blocks. A gun battle between the attackers and Pakistan security forces ensued.

Four gunmen were wearing suicide bomb vests, according to reports.

A commander for the Tehreek-e-Taliban, a Pakistani militant group, claimed responsibility, though Mohammad Khurasani, the main spokesman, later denied that it carried out the attack and described it as “un-Islamic”.

By mid-afternoon local time the Pakistani army said the attack was over and that the site had been cleared.

Witnesses report a much higher death toll than that given officially. A 23-year-old student said he counted 56 bodies and saw gunmen shooting male and female students “without discrimination”.

About three hours after the attack started, the army said the campus was quiet as soldiers conducted a block-by-block search. Four attackers were killed, including two who were shot by snipers, it said.

Pakistan’s prime minister, Muhammad Nawaz Sharif, said he was “deeply grieved” over the attack, and vowed to fight to the end and destroy “the menace of terrorism”.

In December 2014, gunmen affiliated with Tehreek-e-Taliban attacked an army school in Peshawar, killing 132 children. Since then, the Pakistani authorities have killed and arrested hundreds of suspected militants in a renewed crackdown on counter-terrorism.