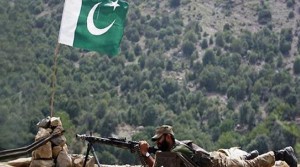 Islamist militants firing from Afghanistan into Pakistan killed seven Pakistani paramilitary soldiers on Tuesday, officials said, in an attack likely to put more strain on tense relations between the neighbours.

Afghanistan and Pakistan routinely trade accusations of doing too little to prevent Taliban fighters and other militants operating in the other’s territory.

The Pakistani army said seven members of the paramilitary Frontier Constabulary (FC) were killed near a border town in the mountainous South Waziristan region.

“Heavy fire from across Pak Afghan border early morning today on a FC check post northeast of Angoor Adda in South Waziristan,” the military said in a statement.

A military official who declined to be identified said Afghan-based militants were responsible.

Afghan President Ashraf Ghani has tried to improve ties with his nuclear-armed neighbour to the east since coming to power last year. Ghani says the two sides must work together to defeat Islamist insurgents who threaten both countries.

Ghani’s overtures appeared to yield fruit in July when Pakistan hosted the first official peace talks between the Taliban and the Afghan government.

But the talks were suspended after news of the death of the Taliban’s founder Mullah Mohammed Omar leaked. A wave of Taliban attacks in Kabul then strained relations with Pakistan.

Afghan officials have long accused Pakistan of tolerating Afghan Taliban seeking shelter on Pakistani territory and even of supporting them, an accusation Pakistan denies.

Instead, Pakistan says the leadership of the Pakistani Taliban – a group loosely allied with the Afghan Taliban but fighting to topple Pakistan’s government – is based in Afghanistan.

Afghanistan recently accused Pakistan of not doing enough to arrest Afghan Taliban leaders meeting to decide on a successor to Omar. Afghan officials say the Taliban are meeting semi-openly in Pakistan.

Pakistan says such meetings are held in Afghanistan.