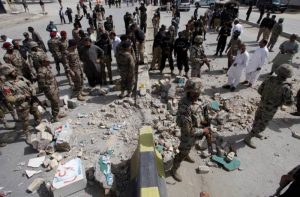 A roadside bomb killed eight soldiers in a remote district in Pakistan’s southwestern province of Baluchistan, a government official said on Tuesday, the second attack within days in the troubled region, like reported by jpost.com.

The blast in Harnai district was some 160 km (100 miles) east of the provincial capital, Quetta, where a suicide bomber rammed his motorcycle into an army truck on Saturday, killing eight soldiers and seven civilians.

The separatist Baloch Liberation Army (BLA) group claimed responsibility for the bombing in phone calls made to media in Quetta. Islamic State said it carried out Saturday’s bombing.

Army chief General Qamar Bajwa said the attack was an attempt to mar celebrations on Monday as Pakistan celebrated 70 years since independence from British colonial rule.

“Our resolve won’t succumb to any challenge,” Bajwa said in a statement the army media wing posted on Twitter.

Separatist militants in Baluchistan have waged a campaign against the central government for decades, demanding a greater share of resources in the gas-rich province, which is a key part of a $57 billion Chinese economic corridor through Pakistan.

The province, which shares border with Afghanistan and Iran, was rocked by a series of attacks late last year that raised concerns about a growing militant presence, including fighters affiliated with Islamic State.