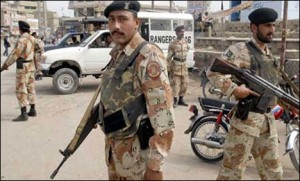 Five suspected Tehreek-e-Taliban Pakistan (TTP) militants – including its Karachi chief – were killed and two Rangers personnel were injured in a clash between security forces and miscreants in Kemari area, Express News reported on Wednesday.

Rangers raided a house on information of militants planning to target the city’s Expo Centre in a bomb attack.

A large cache of arms was recovered from the premises, comprising hand grenades, Kalashnikovs, bullets and ammunition.

Security forces have intensified their efforts to rid the city of terrorism under the implementation of the National Action Plan.