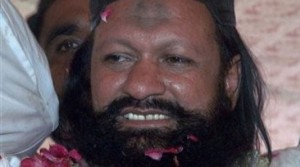 The leader of an anti-Shiite militant group behind some of Pakistan’s worst sectarian attacks was killed in a shootout with police Wednesday, authorities said.

Malik Ishaq was shot dead along with several other senior Laskhar-e-Jhangvi (LeJ) leaders in the eastern province of Punjab.

LeJ, long seen as close to Al-Qaeda and more recently accused of developing links with the Daesh group, has a reputation as one of Pakistan’s most ruthless militant groups.

Ishaq, who has been in and out of police custody in recent years, was arrested on Saturday and was being moved when loyalists attacked the convoy in Muzaffargarh, a senior police official who took part in the encounter told AFP on condition of anonymity.

“The police retaliated and in the encounter Ishaq, his two sons and 11 others were killed, while six policemen were injured,” he said.

Punjab Home Minister Shuja Khanzada confirmed to AFP that Ishaq and “13 other sectarian militants including two of his sons” had been killed in the early hours of Wednesday morning.

Another senior police official said the attack came after Ishaq and the other LeJ cadres had been taken to recover a cache of explosives.

The cache included “three water coolers full of explosive, detonators, a Kalashnikov, some rifles and hundreds of bullets,” the police official told AFP on condition of anonymity.

“After the recovery when police were returning back, at around 3:00am, more than a dozen terrorists attacked the convoy and tried to rescue Ishaq and others,” the police official said.

He said all the six militants in police custody were killed along with eight of the attackers, while some of the would-be rescuers fled.

There has been no immediate reaction from LeJ but police encounters in Pakistan have often being viewed with suspicion.

Ishaq gained notoriety for his anti-Shiite rhetoric and has been accused of masterminding dozens of attacks against the minority group.

LeJ had claimed responsibility for some of the most brazen attacks on Shiite minorities in Pakistan’s recent history including a January 2013 bombing in the southwestern city of Quetta that killed over a hundred members of the Shiite Hazara minority group.

In February 2013, LeJ claimed responsibility for another attack in the same neighbourhood that killed around 80 members from the Hazara community.