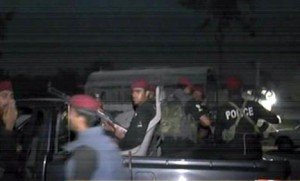 Police on Tuesday claimed to have shot dead five terrorists in alleged encounters and arrested over 40 suspects in different areas of Karachi.

According to details, two suspects were killed in an alleged encounter on Super Highway near New Sabzi Mandi area while arms and a motorbike were also recovered from their possession.

Police said three suspects were killed in an exchange of fire near Maula Madad graveyard in Quaidabad.

Gulshan Iqbal Town SP Aabid Qaim Khani said over 40 suspects were taken into custody during an operation in PIB Colony and Gulistan-e-Johr.