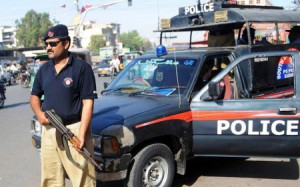 Satp.org wrote that two Police constables were killed when three armed assailants ambushed a check post within the remit of Lea Market Police Station area of Lyari Town in Karachi, the provincial capital of Sindh, on March 30, reports The News.

On March 31, in separate encounters with the Police that began late in the night of March 30, four criminals, including alleged gangsters and terrorists, were killed in different areas of Karachi, reports The News. Police shot dead an alleged criminal at Swati Mohalla of Sherpao Colony in Quaidabad in Landhi Town when he refused to stop after he was signaled by personnel conducting snap checking.

Also, the personnel of Kalakot and Napier Police raided a gangsters’ hideout near Kashti Chowk in Kalakot area of Lyari Town killing two armed gangsters. Police also found several weapons, hand grenades and ammunition from the hideout and a search was under way for those who had escaped. In another incident, the Kharadar Police killed an armed gangster in an ‘encounter’ in Katchi Gali No 3 in Saddar Town.

Separately, the Counter-Terrorism Department (CTD) of the Sindh Police claimed to have killed two ‘militants’ affiliated with the Khan Zaman Mehsud gang in an encounter near Toori Bangash Chowk of Orangi Town on March 31, reports The News. Police found heavy weapons, explosives, a motorcycle-borne improvised explosive device and live ammunition from the militants’ hideout.

Meanwhile, an unidentified armed assailant who had been injured in a purported encounter with the Police in Khuda Ki Basti area of Surjani Town succumbed to his injuries on March 31, reports The News.