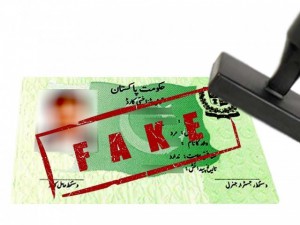 Several top ranking officers of the National Database and Registration Authority (NADRA) have helped terrorists and other miscreants obtain fake national identity cards of Pakistan, reveals a report shared by the country’s premier intelligence agency with the NADRA chairman.

In the report, the Inter-Services Intelligence (ISI) listed 40 officials who have been involved in issuance of fake national identity cards.

According to the ISI report, a copy of which is available with a Pakistani media outlet-the agency, after a comprehensive intelligence scrutiny as part of its counter-terror operations, found many NADRA officials involved in facilitating attempts by terrorists and miscreants to obtain fake identity cards.

The scrutiny was carried out after the law enforcement agencies recovered Pakistani passports and computerised national identity cards (CNICs) in possession of a number of local and foreign terrorists they killed or apprehended as part of the ongoing terror purge, sources stated.

According to the report, a senior al Qaeda leader who was killed by the Pakistani military last year had been in possession of a national identity card for overseas Pakistanis (NICOP).