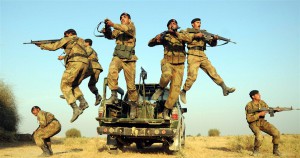 Pakistani troops on May 15 began a “massive” offensive to try to push the Taliban from their last major stronghold in the mountainous northwestern region of North Waziristan, moving in from north and south, officials and residents said.

The heavily forested ravines of the Shawal Valley are pockmarked with Taliban hideouts and the valley itself is a key smuggling route into neighbouring Afghanistan.

“It is a massive military action against the Taliban militants and their allies in the Shawal mountains,” said a government official who asked for anonymity because he was not authorized to speak about military operations.

The Pakistani Taliban controlled almost all of North Waziristan until troops launched a long-awaited offensive there in June. The Taliban still maintain control of Shawal Valley and have used it as a launching pad for attacks on Pakistani forces.

The Pakistani Taliban are allied with Afghan Taliban and share a similar jihadist ideology. But they operate as a separate entity, focused on toppling the Pakistani state and establishing strict Islamic rule in the nuclear-armed nation.

Residents said tanks and soldiers were approaching the valley from the north and south.

“Hundreds of trucks and pickups full of soldiers and weapons…are moving towards Shawal,” said Zainullah, a telephone operator in Shawal Valley.

“There are roadblocks everywhere, no one can come in or go out. There is a complete curfew and phones lines are also being cut.”

Several military officials told Reuters that the Pakistani military had requested help from Afghanistan to prevent militants from fleeing over the border.

Any cooperation would be a significant step forward in a thaw in relations that began when Afghan President Ashraf Ghani took office last year.

Neither the Pakistani nor the Afghan military responded to requests for comment. Government officials in the area said they were not authorized to comment.

A resident said there had been heavy fighting between the militants and the military on the edge of the valley and civilians feared being trapped.

“We are in fear, especially the kids,” he said. “We are now preparing to leave the area and shift to safe places, because last night artillery shells were fired continuously.”