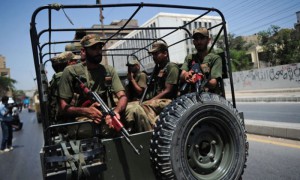 The military has successfully completed a massive offensive mission in Khyber tribal region, flushing out militants and blocking their crossing points on Afghanistan borders, claimed government and security officials.

The military formally brought Operation Khyber-2 to a close on June 15, significantly enough, on the first anniversary of Operation Zarb-i-Azb in North Waziristan.

Four days later, Army Chief Gen Raheel Sharif visited the troops in Tirah to take stock of the military offensive and the gains made in the nearly three and a half month long operation.

Sources told a private media outlet that the military had gained control of important areas, depriving Taliban and Lashkar e Islam of space in one of their toughest strongholds in the tribal regions.

The military, the sources said, had also taken physical control of the three passes from Afghanistan into Tirah – Mzatal, Kandao Gharibi and Dramudrad situated at 7,300 to 9,300 feet altitude above the sea level.