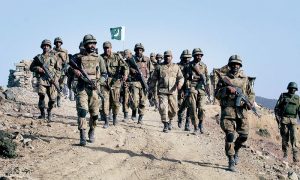 At least two militant leaders were killed and another wounded in a clash with the Pakistani army in the northwestern part of the country, said an official statement on Monday.

In a statement issued by the media wing of the Pakistani army, the security forces conducted intelligence-based operation in the Nargosa area of the South Waziristan district, near Afghanistan border.

“During intense fire two terrorists, Usman Ali and Waheed Lashtai, were killed and one got injured and apprehended,” said the statement.

The terrorists who were killed had been active members of the Tehreek-e-Taliban Pakistan (TTP).

“They were IED [improvised explosive device] experts, terrorist trainers, motivator and were involved in attacks on security forces,” according to the army.

Ali was also involved in the attack on security forces on Oct. 14, 2020, in which six army soldiers, including an officer, were killed while four others were injured.

South Waziristan and North Waziristan — once dubbed the heartland of militancy — are among the seven former semi-autonomous tribal regions in Pakistan where the army has conducted a series of operations since 2014 to eliminate TTP militants.

Successive operations have pushed the TTP towards neighboring Afghanistan, and Islamabad claims the terrorist network has now set up bases across the border to attack Pakistani security forces.

The military operations also displaced over 1 million people, but the government claims most of them have returned to their homes.

In 2018, the tribal agencies were given the status of districts and merged with the Khyber Pakhtunkhwa province.