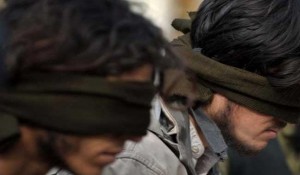 The operatives of security agencies have also arrested top ten commanders of Islamic State militant group who were said to be on a mission in the country to recruit thousands of foot soldiers for the Middle East’s terrorist outfit.

“A key terrorist recruitment network for Daesh has been broken up in Rawalpindi and Attock today (Monday). We’ve arrested around four dozen militants (including top ten commanders) of Daesh who swore allegiance to Abu Bakr al-Baghdadi in Syria and Hafiz Saeed Khan in Afghanistan,” a senior official of the Counter Terrorism Department (CTD) in Punjab police claimed.

These top ten commanders just returned after meeting the Daesh head of Khorasan (Pak-Afghan) region namely Hafiz Saeed Khan in Afghanistan before his death in a US drone strike in Afghanistan a few weeks ago, he revealed. Many of them have also been met Abu Bakr al-Baghdadi, kingpin of the Islamic State in Syria and Iraq, he added.

“He (Hafiz Saeed Khan) had ordered them to spread chaos in Pakistan and create situation for Daesh caliphate in Pakistan,” reads an official document exclusively with Geo News.

Official document further revealed that the CTD police arrested two terrorists belonging to Daesh from Taxila and two from Attock who had planned to attack military and civilian installations. Their names are Hashim Khan from Mehmand Agency and Shakeel Khan from Bajuar Agency, Shaheen from Orkazai Agency and Imran from Gujrat, document continued to reveal.

Hashim Khan S/o Inzar Gul Khan was a key commander of Daesh and running a recruitment camp in Pakistan. Before joining Daesh, he was commanding Tehreek-e-Taliban Pakistan Abdul Wali Group. Shakeel Khan and Shaheen were recruiting militants for Daesh in Rawalpindi and Attock. Imran Mehdi S/o Mehdi Khan, who is resident of Gujrat, was in direct contact with Daesh top leadership in Syria. Before joining Daesh, he was a key commander with Al-Badar and Jamatul Muslimeen. Explosives and arms were also recovered from them including 2,000 gram explosives, detonators, batteries, wires, fuses etc.

The security agencies in intelligence based operation arrested four Daesh terrorists from Allama Iqbal Town, Lahore. Their names are Syed Abdul Alam, Hafeezur Rehman, Nisar Ahmad and Tusawwar Amin. “They were following command of the Daesh Syria through its journal, Dabiq, in which the organisation had directed its followers all over the world to launch local attacks,” reads the document. Hafizur Rehman S/o Sajjadur Rehman, resident of Khushab, was running a training camp in heart of Lahore. Before joining Daesh, he got training in Afghanistan with Al-Badar Mujahideen and also worked for TTP Malik Yaqoob Group.

Recoveries from them included 1,600 gram explosives, 8 safety fuses, 4 non-electric detonators, rifles and ammunition. Laptops were also recovered with large amount of data about their group. In their interrogation, they told that they had a network spread in different cities of Punjab. “They (Daesh terrorists) had decided to make their presence felt and were about to launch attack on office of an intelligence agency,” it further read.

Explosives and arms were recovered from them. “They (Daesh militants) had planned to attack police officials deployed on pickets as their other fellows had earlier done in Lahore and Faisalabad. In interrogation, they also confirmed that some of their fellows had been working in Rawalpindi to launch similar attacks. Details have been given in paras above,” reads the document.

These Daesh militants had visited Afghanistan, Syria and Iraq many times, as they belonged to Daesh Walaya Khorasan, document disclosed further. In interrogation, they disclosed that many families had gone to Syria for fighting for Daesh, it disclosed. “They (Daesh militants) have also told that Daesh has now given a policy to its followers not to arrive in Syria now but conduct terrorist activities locally,” reads the document.