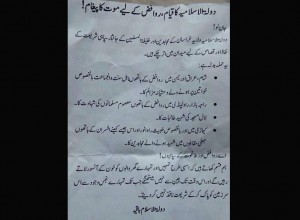 After establishing its foothold in parts of Afghanistan, the militant group Daesh has threatened to target a specific sect in Pakistan’s Federally Administered Tribal Areas (Fata) as well as in the districts of Hangu and Dera Ismail Khan, like reported by thenews.com.pk .

The threat was hurled in leaflets in the Pashto language circulated in border areas of Kurram Agency close to the Durand Line separating the two countries.The leaflets claimed that the followers of Daesh after gaining foothold in Afghanistan would launch activities in Hangu, Dera Ismail Khan and the tribal areas.

The leaflets carry the flag as well as pictures of the activities of Daesh, also known as the Islamic State.Meanwhile, Member National Assembly Sajid Hussain Turi and elders of the Turi-Bangash tribes have condemned the threats issued to members of a specific sect.

They said that they were not frightened by the threats due to the presence of strong contingents of the Pakistan Army in their area. They maintained that the Pakistani security forces would deliver a severe blow to the hopes of terrorists to make inroads into Pakistan.

However, they pointed out that Kurram Agency is surrounded by Afghanistan from three sides and this made it easier for the terrorists to infiltrate into Pakistan.They asked the government to take steps for the security of the people and vowed to extend support and cooperation to the security forces for defeating the terrorists.

Daesh has been able to occupy some territory in Nangarhar province in eastern Afghanistan. The Afghan government recently claimed that Daesh is present in 11 out of the 34 provinces of Afghanistan. As Daesh is bitterly anti-Shia, it claimed responsibility last year for terrorist attacks on Shias in Kabul and Herat provinces.