You are here: Home / West Asia / Pakistan: Daesh exists. Daesh does not exist! 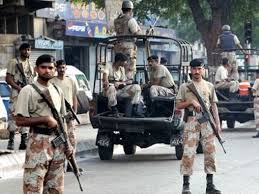 Whether Daesh or ISIS has any sort of presence in Pakistan has lately triggered a debate in government circles with some saying that the terror outfit does not exist while others harbouring the quite opposite point of view. There has been a series of statements and counter statements from the ministers, foreign office and the intelligence agencies about the presence or non-presence of the outfit, which not only caused confusion but also created fear and panic amongst the people.

Starting with the statement of Director General Intelligence Bureau Aftab Sultan who, while briefing the Senate’s standing committee the other day, said a Daesh network has been busted. The DG intelligence bureau went on to say that hundreds of people are also leaving the country to join the ISIS in Syria. Provincial Law Minister Rana Sanaullah has repeatedly made a similar admission about the presence of Daesh in Punjab.

At the weekly news briefing on Thursday, the new Foreign Office Spokesperson Nafees Zakria, however, rebutted reports about the presence of terror outfit. The latest and more categorical statement has come from Interior Minister Chaudhry Nisar Ali Khan, who on Saturday, said that the Arab outfit does not exist on Pakistani soil and that other terror groups, which are perpetrating acts of terrorism against the state are using the name of Daesh to cause death and destruction in the country.

In our view also, the statement of the interior minister appears to be more apt and pertinent as the local terror groups might be faking affiliation with the Daesh for various reasons and the most obvious one is to terrorise the people. With the conflicting statements of relevant officials, these groups might have been able to achieve the objective of creating fear and panic amongst the people. While the outside world already see Pakistan as a country providing sanctuaries to terrorists, the statements and reports on presence of Daesh has further tarnished the country’s image abroad.

Therefore, extra care should be taken while making announcements on such sensitive issues particularly relating to terrorism. We, therefore, would urge the government to devise a proper system in which only authorised spokespersons, as is the world practice, are liable to make statements pertaining to their respective areas.