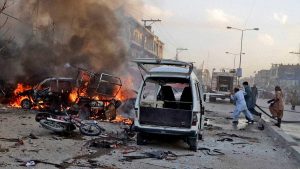 A bomb exploded by a convoy of the deputy chairman of Pakistan’s Senate on Friday, in the violence-plagued province of Baluchistan, killing at least 10 people, police said according to reuters.com.

The blast occurred the town of Mastung, 50 km (30 miles) from the provincial capital of Quetta. Television footage showed a vehicle mangled by the blast.

Senator Abdul Ghafoor Haideri, the deputy chairman of the upper house of parliament, told Reuters minutes after the blast that he believed he was the target and he had sustained minor injuries.

“My convoy was going to Mastung and there was an explosion. There are many casualties as there were many people in the convoy,” he said by telephone.

Mastung police official Ghazanfar Ali Shah said the convoy appeared to have been hit by a suicide bomber and at least 10 people were killed, including Haideri’s driver.

Separatist militants in Baluchistan have waged a campaign against the central government for decades, demanding a greater share of the gas-rich province’s resources.

Taliban and other Islamist militants also operate in the province, which shares borders with Afghanistan and Iran.