Pakistan says security forces have foiled a ‘major terrorist attack’ on minority Christians on Easter Sunday by killing a militant and detaining his associate in Lahore, like reported by livemint.com 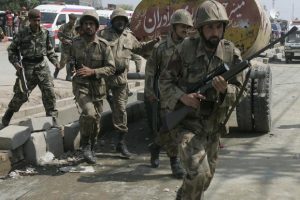 Pakistan’s military says security forces foiled a “major terrorist attack” on minority Christians when they killed a militant and detained his associate in the eastern city of Lahore.

In a statement, the military said Saturday four soldiers were wounded in an overnight raid.

It was unclear which militant group wanted to target Easter Sunday in Lahore, where more than 70 people were killed in a 2016 suicide bombing at a park, which was crowded with Christians and Muslims at the time.