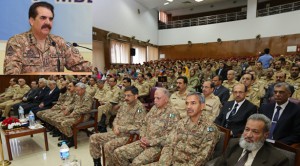 The National Assembly on Monday passed a resolution extending the Pakistan Army Act 2015 by another 120 days.

Defence Minister Khawaja Asif presented the bill which was tabled in NA today.

Muttahida Qaumi Movement (MQM) MNAs opposed the resolution and aggressively protested while standing from their seats in assembly.

Khawaja Asif responded to the protests by saying that those who are opposing the ordinance are scared that their wrong doings will be exposed.

Speaking outside the assembly, MQM MNA Iqbal Qadri said that it is obligatory that the reason for the extension in the Army Act is provided.