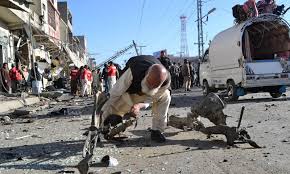 At least seven police personnel were killed and 24 others injured as a powerful bomb went off near their vehicle in Sariab Mill area of Quetta, like reported by paktribune.com.

A police truck carrying 35 personnel was targeted by the huge bomb. The blast was so powerful that the truck was left badly mangled. According to eyewitnesses, a white car parked on the roadside exploded as the truck carrying around 30 Rapid Response Force (RRF) personnel passed by. Following the bombing, the vehicle caught fire. The blast caused damage to several other vehicles as well as a rickshaw parked nearby.

Deputy Inspector General of Police (DIG) Abdul Razzaq Cheema said an investigation is underway to determine whether the blast was a suicide bombing or whether the explosives-laden vehicle was detonated remotely when the police truck was passing by, adding that the death toll could increase.

The 35-strong contingent of elite policemen had been recently assigned patrol of various sensitive areas and were on their way to work on the Quetta-Sibi road when the explosion took place, Balochistan Home Minister Mir Sarfraz Bugti said.

Bugti told AFP that a car rammed the police vehicle before catching fire, adding it was ‘apparently a suicide attack’. “Police were targeted in this attack,” Bugti said.

Following the attack, an emergency was imposed in hospitals in Quetta. Some of the injured were admitted to Civil Hospital Quetta, while the rest were being treated at the Combined Military Hospital.

A forensic team and the Bomb Disposal Squad had reached the site of the attack to investigate the nature of the blast, Bugti said, adding that a forensic team from Lahore would arrive in Quetta on Thursday to aid in the probe.