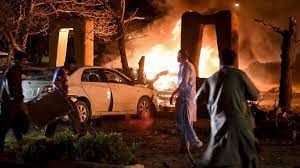 Addressing a press conference here, the minister said that external elements are trying to destabilize Pakistan and cannot digest progress of Pakistan. He revealed that 200,000 to 300,000 social media accounts were formed from India in last 10 days to target Pakistan.

He also strongly condemned the Quetta blast and said that he has directed Chief Secretary to investigate the incident The minister said the Ministry of Interior had directed all 22 law enforcement institutions under its jurisdiction, which include the FC, Rangers, Coastal Guards and others to remain on high alert.

He said Pakistan was a great nation and with the help of its great armed forces and intelligence agencies, will thwart all evil designs as well as conspiracies being hatched in India, against it.

The minister said that out of the 11 who were injured, six had left the hospital after getting treated while two are reported to be in critical condition.

The minister said that Balochistan and Gwadar are future of Pakistan and China is closest friend of Pakistan.

To a question, the interior minister clarified the Chinese ambassador was in Quetta for the past few days and is safe.

He rejected speculation that the Chinese ambassador was at the hotel when the blast took place, saying that the diplomat was somewhere else.

He said an elected prime minister, a great army and 220 million people were the guardians of the nation. “We know how to live and die for this country,” he said. He reiterated that armed forces of Pakistan won fight against terrorism after laying down thousands of lives.