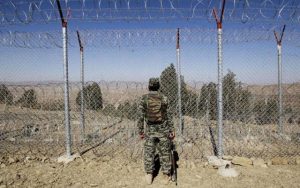 As many as four Pakistani soldiers were killed and six others injured in a terrorist attack near the Pakistan-Afghanistan border in Balochistan, like reported by sify.com.

A statement from Pakistan’s Inter-Services Public Relations (ISPR) said that the attack took place in Zhob district on Wednesday when paramilitary troops were engaged in border fencing activity along the border in the district, Pakistan Today reported.

Soon after the attack, the injured soldiers were sent to Combined Military Hospital (CMH) in the capital city Quetta.

Around 90 per cent of work on Pakistan’s side of the fence, on nearly 2,600 kilometers border with Afghanistan, has been completed.

Earlier, ISPR had said the fence is being erected to stop terrorist activities and illegal activities including smuggling from Afghanistan.