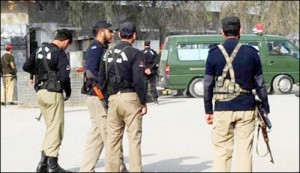 Four Al-Qaeda militants were killed in a joint action by police and Counter Terrorism Department in Dera Ghazi Khan.

Police spokesman said, on a tip-off police and CTD personnel carried out operation in Wador area within the limits of Gadani police station.

Exchange of fire took place between security officials and the terrorists in which four Al-Qaeda terrorists were killed.

Militant commander Shoaib Cheema and Hanif Muhammad managed to flee during the action.

Police said, the terrorists had entered Punjab via Balochistan and wanted to launch a major terror activity in the province.

The terrorists were affiliated with Al-Qaeda, the police added.