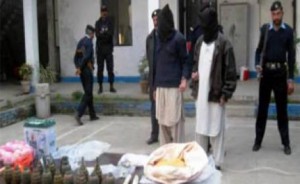 The Peshawar police on Monday thwarted a terror attempt by arresting two terrorists for planning an attack. According to police, two terrorists were arrested from Wali Jan Garhi area of Mithra on the outskirt of Peshawar.

The Police also recovered around 40 kg explosive and arms from the possession of the arrested terrorists. Police said a raid was conducted in Wali Jan Garhi area after receiving inputs from the secret agencies about the whereabouts of terrorists.

During the raid, police arrested five people including two terrorists and also recovered two bombs of 20 kilograms each, 2 rocket launchers and 2 rockets. The arrested suspects were shifted to undisclosed location for further interrogation.  Search and strike operation was still underway in Peshawar and its suburbs where 70 suspects, including 27 illegal Afghan residents, have been rounded up from different localities.