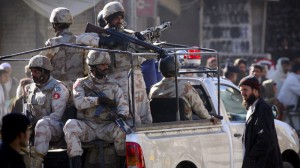 At least ten separatist insurgents were killed and 12 others arrested in an operation by paramilitary troops in Pakistan’s southwestern province of Baluchistan, officials said Saturday. The incident occurred in Sangan area of Kahlu district, some 180 kilometers southeast of the provincial capital Quetta.

Baluchistan, Pakistan’s largest but least developed and most sparsely populated province, has been wrecked for decades by a separatist insurgency that was revived in 2004.

The separatists believe that locals do not receive a fair share of the province’s energy and mineral wealth, while rights groups accuse the government of extra judicial detentions and the killing of activists.

The province is also blighted by religious extremists, banditry and sectarian violence between Sunni and Shiite Muslims.