You are here: Home / West Asia / Pakistan: 10 people killed, over 20 wounded in explosion near Peshawar 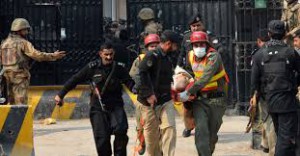 10 people have been killed and more than 20 wounded in an explosion near Peshawar.

Officials say most of the victims are security forces, locally known as Khasadar Force.

Initial investigation reveals that it was a suicide attack targeting security forces near Karkhano Market in Khyber Agency’s Jamrud tehsil.

Those killed include president of the Tribal Union of Journalists Mehmoob Shah.

Soon after the blast security personnel and rescue teams arrived at the blast sight and moved the victims to Hayatabad Medical Complex where an emergency has been declared.

This comes as earlier in January Pakistan issued a security alert of possible suicide attacks in Khyber Agency.

The alert stated that 13 suicide bombers from a banned militant organisation have entered into Jamrud Tehsil.

Khyber Agency is reportedly the hotspot of Lashkar-i-Islam militant group which also operates across the border into Afghanistan.

Jamrud tehsil has witnessed some deadly explosions in the past including a suicide attack inside a mosque in 2011 that left at least 30 people killed and over 100 others wounded.