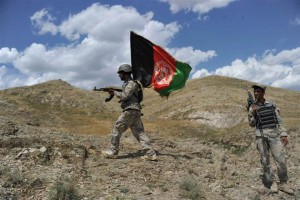 Following the clash involving Pakistani and Afghan security forces on Wednesday, the border between the two countries at Angoor Adda remained closed for the second consecutive day on Thursday.

The border was closed after the clash between the forces deployed on either side of Durand Line on Tuesday night and Wednesday morning.Three Pakistani security personnel were reportedly injured and an Afghan border security official was killed in the clash.

Government officials and tribesmen in Angoor Adda said the situation remained tense on the border and it was kept closed for all types of movement. “The situation is quite tense. There is no movement on the border and several vehicles transporting goods between the two countries are stranded on both sides,” a local tribesman Khaista Noor told The News by telephone from Angoor Adda.

The Afghan forces were opposed to the construction of a gate on the border by Pakistani security forces and they opened fire when the Frontier Works Organisation (FWO) workers arrived there to continue work at the site. The Pakistani officials said they were building the gate on their side of the border, but the Afghans thought otherwise.