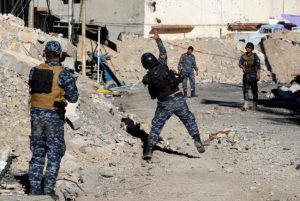 Around sixty Islamic State militants were killed while combing Mosul’s Old City, Federal Police have announced according to iraqinews.com.

Fifty-seven militants and four snipers were killed, according to the statement. Eplosive belts, missiles and weapons were found.

On Saturday, Jawdat said four regions including al-Nujeifi, al-Sarai and parts of Lakash and Bab Jadid were still held by IS. Once liberated, Federal Police will announce accomplishing its goals there.

Earlier this week,Counter-Terrorism Service Commander Abdul-Ghani al-Assadi expected the final liberation of Mosul to be achieved within a few days. Only between 200 and 300 IS fighters are cornered at areas overseeing the western bank of the Tigris River.

Iraqi government forces, backed by a U.S.-led coalition, have been fighting against IS fighters since mid October. The eastern side of Mosul was recaptured in January after three months of battles. Another offensive was launched in February to retake the western flank of the city. Last week, troops took over the Old City’s Nuri al-Kabir Mosque where IS first declared its self-styled “caliphate” in Iraq and Syria in 2014