You are here: Home / MidEastGulf / Over 90,000 displaced in north Yemen battle zone 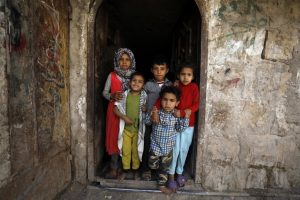 More than 90,000 people have been displaced in Yemen’s flashpoint Marib province since January due to intense fighting between the government and the Houthi rebels, the UN said on Tuesday, like reported by jordantimes.com.

The Iran-backed Houthis have long held the capital Sanaa which lies just 120 kilometres away and are mounting a fierce campaign to take the oil-rich province — the government’s last northern stronghold.

The escalation in fighting has pushed more and more families from their homes, and is now threatening 140 camps currently operating in the province.

After years of conflict, some sources put the number of displaced in Marib at 1 million.

“Deadly fighting now is entering its 10th month in northeast Yemen, where more than 90,000 people have been displaced to and within Marib governorate since January,” the International Organisation for Migration (IOM) said in a statement.

“That’s over half of all conflict-related displacement in Yemen this year. The situation is about to get worse.”

Christa Rottensteiner, Yemen chief of mission for the IOM, said the UN agency was “hugely concerned” as the fighting drew nearer to areas heavily populated with civilians.

“We hope that a peaceful resolution can be found soon to prevent a massive displacement crisis: hundreds of thousands of people could be forced to flee, many of whom would be running from this conflict for the second, third or even forth time,” she said.

Until early 2020, Marib city was spared the worst of the conflict, due to its strategically important oil and gas reserves, and also because of its location near the border of regional power Saudi Arabia.

It became a sanctuary for many in the early years of the five-year war, taking in those hoping for a new start, but that relative stability is gone and residents are in the line of fire as the two sides battle for control.

Tens of thousands of Yemenis, mostly civilians, have been killed and some 3.3 million people displaced in what the UN describes as the world’s worst humanitarian crisis.

Rottensteiner warned that if there is no resolution, “more areas would become unreachable for humanitarian organisations, meaning vulnerable communities would be left without even the most basic support”.