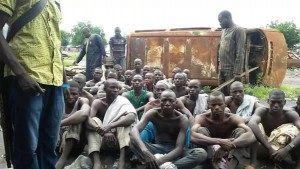 According to the interior minister Bazoum, dozens of Boko Haramfighters have given themselves up to authorities in southern Niger, just days after the Islamist group suffered key losses over the border in Nigeria, the Daily Mail reports.

“Thirty-one young people from Diffa, who were enrolled a few years ago in Boko Haram, decided to surrender,” minister Mohamed Bazoum wrote on Twitter on Tuesday, above pictures of him touring the area near Nigeria’s northeast border.

The fighters arrived in the remote desert town of Diffa in groups and were being held by local authorities.

“I learned that the first who surrendered were not arrested, and I surrendered,” a former Boko Haram combatant told national television.

“We expect a pardon from the government so that we can participate in the development of the country and help us get rid of the trauma.”

In June, tens of thousands of people fled Diffa as Boko Haram swept the region. Five Niger soldiers were killed by the militants near Diffa in September.

It was not clear what will become of the ex-Boko Haram fighters, but authorities said there was the possibility of reintegrating them back into society. A security source said a meeting was planned for Wednesday in Diffa to discuss “the conditions of surrender“, without providing further details.

Boko Haram has killed 15,000 people and displaced more than 2 million during a seven-year insurgency aimed at creating an Islamic state in Nigeria. In recent years its attacks have spilled into neighbouring Niger, Cameroon and Chad.

Hundreds of Boko Haram fighters surrendered in Chad in October and November as the group ceded territory.

The group controlled an area about the size of Belgium in early 2015 but has since been pushed back by international forces including troops from Niger. Nigeria’s army captured its last enclave in the vast Sambisa forest on Friday, President Muhammadu Buhari said on Saturday.