You are here: Home / Europe / Over 200 Kosovars fighting for Islamic State in Iraq, Syria 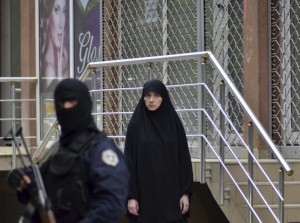 A new report has found that there are at least 232 citizens of Kosovo fighting alongside militant groups in Iraq and Syria, according to IBTimes. The country in southeastern Europe ranks eighth overall among Western states that have seen their citizens leave to join groups like the Islamic State.

The Kosovar Center for Security Studies (KCSS), which published the report, found that the first Kosovo citizen to be killed fighting in Syria was a militant named Naman Demoli from Pristina, whose death was reportedly announced in a 2012 YouTube video. His death “raised some eyebrows,” according to the report, as it soon became apparent that there were dozens of other Kosovars fighting there.

The importance that ISIS placed on its foreign recruits was hinted at when ISIS leader Abu Bakr al Baghdadi released a video in June 2014 proclaiming himself “caliph.” The video was translated into English, French, German, Turkish, Russian and Albanian.

The issue of ISIS drawing on Kosovo and other Balkans countries was underscored in October 2013, when another Kosovar, 24-year-old Albanian named Lavdrim Muhaxheri, appeared in an ISIS video calling on Albanian Muslims to join the fight against Syria’s President Bashar Assad.

Muhaxheri again came into limelight when he posted photographs on Facebook showing him apparently decapitating a Syrian soldier.

He was reportedly active within Kosovo’s Islamic community in the southern city of Kacanik. He had boasted on his Facebook page of his clout in Kacanik claiming he controlled the appointment of imams in the city’s central mosque, and threatening to kill clerics and politicians who subscribed to moderate Islam, according to Stephen Schwartz of the Center for Islamic Pluralism.

The majority of Kosovars are thought to have joined militant groups in 2013, according to the KCSS report, at a time when ISIS was rapidly consolidating power.

The report said that the Kosovar government neglected rural communities after the Kosovo war ended in 1999, which created a vacuum for “Middle Eastern charity organizations to massively penetrate these areas.”

Under these conditions, the report said, religion played a crucial role in Kosovo’s public life, allowing political and religious groups affiliated with Islamist ideologies to undermine the government. The report was also critical of policymakers’ inability to distinguish between extremist religious ideologues and other religious authorities, opening the door for “counterproductive consequences.”

Shpend Kursani, one of the report’s authors, told Radio Free Liberty that those who support groups like ISIS tend to feel alienated from social and state institutions.

“They are against all the state institutions, police and army, they’re against voting, against handshaking with a police or a soldier for that matter, because in such a case, you would be immediately regarded as infidel,” Kursani said. He added that relatives of these people were often treated with suspicion or hostility within their communities. “For instance, when we met a brother of a person who was killed in Syria, he was very isolated, neighbors kept calling him a ‘terrorist’,” Kursani said.

Kosovar Prime Minister Hashim Thaçi has sought to downplay the growing concern about extremists in the country, reaffirming his support for the Western coalition fighting against ISIS. “Kosovo is a country where the majority of the population declare themselves to be Muslim. But Kosovars wholly reject the religious dogma proposed by radical strains of political Islam, and we shall not allow it to endanger our path towards eventual Nato and EU membership,” he wrote in the Guardian in September 2014.

He also defended his government’s security efforts against radical Islamists, pointing to an August raid where police arrested around 30 men and seized a cache of weapons and explosives.

The KCSS report urged the country to take stronger steps to fight against ideological vulnerability and the poor socioeconomic conditions that have engendered them. It also called for efforts to deradicalize those who have embraced ISIS ideology, as well as ensure that secular institutions and religious leaders worked jointly to tackle the issue.