You are here: Home / Africa / Over 1,000 killed in Nigerian Islamic sect Boko Haram attacks in Cameroon 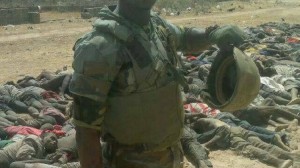 Over 1,000 people have been killed since Nigerian Islamic sect Boko Haram launched attacks to Cameroon in 2013, a senior official has said.

Among the people who were killed in the attacks, there were 1,098 civilians, 67 soldiers and 3 policemen, said the statement.