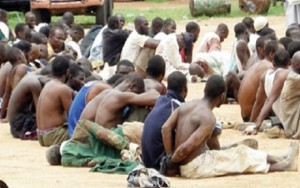 The Nigerian military is alleged to have transferred over 100 suspected Boko Haram members from Maiduguri, Borno State, to unknown locations in the country.

This is coming against the backdrop of recent developments where economic activities were paralysed in Anambra State following unconfirmed reports that the federal government was planning to relocate Boko Haram detainees still awaiting trial in various parts of the North-east to the state,  but this has been denied by the ruling All Progressives Congress (APC)

However, THISDAY was informed of the transfer last week by a source who claimed that the Boko Haram suspects who were captured during the recent offensive against their hideouts in Sambisa forest and other locations were transferred in two batches.

According to the source, the first batch of over 50 Boko Haram Prisoners of War (PoW) were lifted out of Maiduguri Airport to an unknown location on June 21, 2015, while the second batch of over 50 were also transferred on the June 24 by the C-130 military transport plane.

The source further claimed that the captured terrorists were usually taken to the Kainji Air Force Base where they might be taken for trial or handed over to the appropriate authorities.

The source said: “A C130 aircraft came and lifted over 50 Boko Haram captured fighter to Abuja or where we don’t know probably to show President Muhammadu Buhari their efforts.

“We don’t know the reason why that was done. We don’t know whether our big men (military authorities) want to show the president how serious we have been in the fight against the Boko Haram boys. To me this was a waste of aviation fuel and other logistics. In fact, we don’t know.

“These Boko Haram boys were all captured from the bush (Sambisa forest). They did not have a hold anywhere any longer but were just running in the bush with or without riffles because they did not have anything to eat or drink again. They were so tired and battle-weary that it was easy to capture them alive. And normally, the Kainji Air Force Base, Maiduguri, is where these kind of terrorists were kept. So for now we don’t know why we are hearing from some airmen that the C130 was heading to Abuja.”

The source further disclosed that “a second batch went four days after but where they are carrying them to was still what we are to ascertain…
Because initially, the Kainji Air Force base underground is where suspected Boko Haram insurgents used to be kept whenever they were captured from Maiduguri.”

Meanwhile, all efforts to reach the Director of Defence Information (DDI), Maj-Gen. Chris Olukolade, were not successful, as text messages and calls were not responded to.

The South-east Zone of the All Progressives Congress (APC) has urged members of the public to disregard the reports of the relocation of Boko Haram detainees to Anambra State.

The party stated categorically that the rumour making the rounds was a “blatant falsehood.”
The party in a statement issued by its spokesman for South-east, Osita Okechukwu, said it had made contacts with the presidency and the Nigeria Prison Service (NPS) and the Ministry of Internal Affairs and that they promised that there was no iota of truth in the mischievous rumour.

Onitsha, the commercial nerve centre of the South-eastern zone  as well as other major towns of Anambra State were temporarily shut down on Saturday  as over 2000 traders  protested what they said posed a threat to their lives and means of livelihood.

The traders took to the streets to kick over alleged plan to transfer detained Boko Haram suspects to prisons in Anambra State.

As a result, all commercial outlets, including the Onitsha main market and other major markets were shut and commercial and social activities grounded throughout the duration of the protest which lasted for hours.

However, Okechukwu said: “We have made contacts with the presidency and the NPS and the Ministry of Internal Affairs and they assured us that there is no iota of truth in the mischievous rumour.

“In the clarification, the NPS stated unequivocally that, “Most of the terror suspects are awaiting trial and so there is no way they can be moved to another state, because they must be tried in the state where they committed the crime.”

“They went further to state that their primary and traditional duty is to move detainees from prison to trial courts and wondered how easy it is move the detainees more than 1000 kilometres from Onitsha to Maiduguri if they are relocated?

“Accordingly, the South-east zone of the APC candidly appeals to our dear compatriots to disregard the blackmail and sinister rumour of rear-guard elements; who are yet to recover from their failure in the March 28 presidential election.

“We assure our people that the  change President Muhammadu Buhari promised is real: the seond Niger Bridge, federal roads, Enugu coal and other physical and social infrastructure in the South-east will be revamped,” he said.