You are here: Home / Mediterranean / Opposition to and problems with the Libya Political Agreement 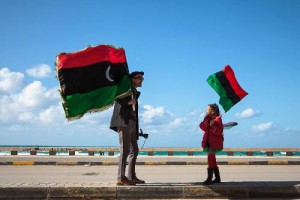 Martin Kobler, the new head of the UN Support Mission in Libya(UNSMIL) and in charge of the Libya dialogue process, announced that the dialogue group he had gathered to meet in Tunis had agreed to the UN-sponsored Libya Political Agreement(LPA)

The final draft of the LPA had been presented to the two rival Libyan governments some months ago by the former head of the UNSMIL, Bernardino Leon. One government is the internationally-recognized House of Representatives(HoR) located in Tobruk in the east and the other is the General National Congress in west in Tripoli. Both Leon and Kobler, after he took over on November 17th, tried to get the two parliaments to pass the LPA but both were unsuccessful. However, Kobler gathered together 40 members of the dialogue group in Tunis for a meeting to approve the LPA. The group included members of the two rival governments the HoR and the GNC. Two officials present, one from the HoR and the other from the GNC announced that a target for signing the agreement was next Wednesday December 16th. Because of security concerns the plan is to have the signing in Skhirat Morocco rather than anywhere in Libya. The agreement has overwhelming international support including that of the UN Security Council and the Rome meeting.
However, there is also considerable opposition to the LPA. The mayors of municipalities in the east of Libya along with elders’ councils both were strongly critical of what they term “suspicious moves” taken by some international powers in order to tighten their grip on a decision that should be made domestically. The two groups sent a letter to the the General Secretary of the UN Ban ki-Moon and the president of the Tobruk parliament expressing their total rejection of the outcome of the meeting with dialogue members convened by Kobler on December 10 and 11:

“We call on UNSMIL’s head to dismiss some of the UNSMIL’s staff, especially the head of political office, head of media office and his personal secretary, who have been playing a biased, negative, and unauthentic role in the process of the Libyan dialogue.” The group claimed that such unilateral meetings as those held by the UN in Tunisia helped establish the Libya norm of division, separation, tribalism and pave the way for a civil war in Libya.

The response from some in the GNC-controlled area was also negative in some instances. First deputy president of the GNC Awad Saddeq said that all members of the GNC at Tripoli were acting without authorization of the GNC and so were simply signing for themselves. The Misrata Council of Elders said on Sunday that the solution to Libya’s crisis had to be worked out by Libyans and expressed support for the alternative declaration of principles issued by members of both governments who met separately from the UN dialogue in Tunis on Friday. The council said that foreign participants should respect the need for a Libyan-Libyan dialogue: “We urge the countries taking part in Rome Conference not to take any steps to adopt the UNSMIL-sponsored government, lest the situations in Libya could deteriorate.” Of course this did not happen. Indeed the alternative plan was widely condemned as an attempt to derail the UN process. There have been demonstrations in support of the Libyan-Libyan dialogue in Tripoli, Misrata and Al-Zawiya.

While outside of Libya the response to the UN initiative is mostly positive, some analysts have pointed out problems that any attempt to create a Government of National Accord(GNA) that is part and parcel of the LPA will face. In a separate article, I already indicated the huge issues of security involved unless there is some parallel military agreement. One commentator on the appended video makes the same point. Analysts point out that if there is no support on the ground for the GNA then the international community could face not two rival governments but three all claiming legitimacy.The GNA that is backed by the international community would have the least support on the ground. The GNA might even need to be located in exile, perhaps in Tunis. Even now the signing ceremony cannot be held in Libya for security reasons.

Frederic Wehrey, of the Carnegie Endowment for International Peace, said of the UN plan: “It’s fraught with pitfalls because you could have a paper consensus but then, what does that mean on the ground in terms of actual governance? This agreement could produce yet a third governing body that is backed by the international community but lacks legitimacy at home or lacks authority at home.” The UN may yet be able to have one or both of the rival governments sign on. There are strong motivations to do so. The GNA will provide jobs and support for the all the present members of the HoR. Many have already signed on to the LPA. If they leave for the GNA then what will happen to the HoR? The international community will cut off funding. The mandate of the HoR has already run out. All those countries that now recognize it would switch to the GNA. Those in opposition may just decide to toss in the towel and sign on to the GNA rather than lose their positions. This may be why we hear no strident criticism of the deal from the HoR. The GNC might face a similar situation in which many members simply move to the GNA.

This however might create a situation in which dominant military forces simply establish their own competing governments and replace those who migrated to the GNA. The situation might suit Khalifa Haftar who argues that the HoR should be replaced by a military council. The issue of security appears crucial . As Dirk Vandevalle, associate professor of government at Dartmouth put it: “A unity government will effectively not have any control over—let’s call it the monopoly of violence, over the ability to control the country militarily,” The first foreign military intervention in Libya after the creation of the GNA might be to protect the members of the GNA rather than battle against the Islamic State.