You are here: Home / West Asia / “Operation Twilight”: the changing faces of terrorism and counterterrorism in Bangladesh 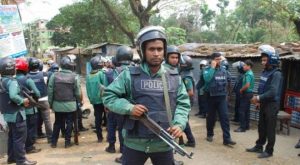 On 28 March, the Bangladesh Army officially drew the curtains on ‘Operation Twilight’ – the longest and most complex counter-terror (CT) operation in the country’s history, like reported by ipcs.org . The five-day episode took place from 24-28 March in a 30-apartment residential building in Shibbari neighbourhood in Sylhet city, northeastern Bangladesh.
Four militants – three male and one female – belonging to the ‘Neo Jamaat-ul-Mujahideen (Neo-JMB)’ faction were neutralised during the operation jointly conducted by the 1st Para Commando Battalion and 17th Infantry Division of the Bangladesh Army with assistance from the paramilitary and the police. 78 civilians were successfully rescued from the building without any casualties. However, six (including two police officers) lost their lives in a diversionary suicide blast close to the operation site.
The template of the operation, including the armed response accorded by the militants, is indicative of two things: a qualitative progression of Bangladesh’s CT agenda; and an apparent evolution of the militant profile in the country.  A closer look is imperative.
Tactical Restraint in a Difficult Situation
Operation Twilight was an unprecedented raid-and-rescue operation in itself, with respect to scope and design. Despite facing an extremely delicate scenario of heavy civilian presence in and around the operational area, the security forces managed to complete the operation without any civilian or troop casualties. This is notwithstanding the six people who died in a suicide attack on a crowd of onlookers standing near the target building.
Unlike in the previous raids, this time, the militants put up an aggressive response to the Bangladeshi security forces. The highly-trained militants had rigged the entire building with explosives, wore suicide vests, and were in possession of a vast cache of ammunition. This delayed the overall response time of the raid, which remained focused on avoiding a hostage situation and collateral damage.
It is notable that the core command of the operation was given to the army, and not the CT Police or the Rapid Action Battalion (RAB) – two units that have been involved in CT operations since July 2016. This was done due to the heavy civilian presence in the building. Furthermore, media personnel who arrived at the scene were barred from moving close to the building to restrict uncontrolled broadcast of operational details.
In meting out a graded and calculated response, the Bangladeshi authorities showed appreciable tact and strategic restraint. Crucially, by not resorting to an indiscriminate assault design, they made sure that no civilian lives were put at risk in a situation where overkill were a firm possibility.
What Does the Operation Indicate?
Since the July 2016 Gulshan attack, Bangladeshi security forces – particularly the CT Police and the RAB – have conducted approximately 24 raids in ‘hideouts’ across the country, resulting in deaths of nearly 60 suspects and arrests of 25 others. These raids can be divided into two phases: mid-July-23 to December 2016 and December 2016-April 2017.
There are three notable aspects about the first phase:
First, they were all conducted in the central and western parts of the country, mostly in and around Dhaka. Second, the militant suspects/targets either surrendered without a fight or mounted a weak counter-assault. Third, they were largely reactive and single-tier, i.e. the targets were selected on the basis of specific intelligence on the Gulshan attack and acted upon by either the CT Police or RAB.
However, the situation appears to be rapidly changing within the second phase:
First, a tactical escalation in the overall militant response appears emergent. The suicide blasts during a 23 December raid in Dhaka; the two failed suicide attacks on 17 and 24 March in a RAB facility and a police post near Dhaka International Airport; and the intricate counter-assault during Operation Twilight reflect this new prognosis.
From a purely defensive posture, the militants seem to have moved to an offensive-defence calibration, wherein suicide attacks and Improvised Explosive Devices (IEDs) are being employed for a dual purpose of proactively attacking security forces and evading capture during raids. This counter-aggression is somewhat reminiscent of other high-intensity conflict theatres like Mosul (ongoing) and Grozny (1999-2000), but entirely new for Bangladesh.
Second, the Neo-JMB faction appears to be expanding to the northeastern and southeastern parts of the country. Since 8 March, there has been a sudden uptick in CT raids in and around Sylhet and Chittagong districts (six raids as of 1 April), with the latest being Operation Maximus in Moulvibazar district that ended with the eight militants and their kin blowing themselves up. Large amounts of IEDs, explosives, and ammunition have been recovered during these raids, some of which bear similarities with material found after the recent attacks in Dhaka. The Neo-JMB’s territorial expansion is a clear attempt to evade detection by the security apparatus, which has been largely focused on the central and western parts. However, the militants appear to be using their new bases in the east purely as strategic hideouts to plan attacks in Dhaka and other major cities westward.
Third, the Bangladeshi state’s response appears to be taking on a more sophisticated and proactive quality. This is reflected in the multi-tier, broad-spectrum nature of recent raids that have focused on flushing out the core leadership of the Neo-JMB from all quarters of the country through precision intelligence gathering and case-specific operational tactics, including use of drones for pre-assault surveillance. In this, Dhaka’s CT response has become far more comprehensive and contextual than it was a year ago.
For now, Bangladesh’s security forces appear to be instrumentalising their experience of the past eight months in CT ops rather effectively. However, given the progressive adaptability and resilience demonstrated by militant groups like the Neo-JMB, Dhaka needs to constantly evaluate its CT agenda and tactics.