You are here: Home / Senza categoria / OPEC’s might falters further with Saudi Arabia and Iran crisis

Members of the oil exporting cartel are in conflict, but that doesn’t mean less oil… 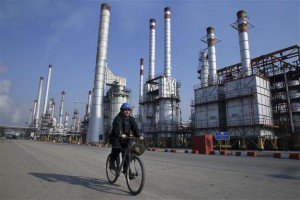 The frequent reaction to conflict in oil-rich countries is a jump in the price of crude, amid worries there could be a disruption to oil production.

That’s what happened this past weekend as oil heavyweights Iran and Saudi Arabia clashed. Oil futures jumped more than three per cent by Sunday. It was a knee-jerk reaction as the news broke and the conflict developed. But when markets opened on Monday, analysts took a close look at whether the situation was severe enough to have a lasting impact on oil production.

The answer seems to be no.

The glut of oil right now is large and experts say there doesn’t seem to be a path to escalation that would actually affect oil volumes.

That’s why oil traded down on Monday, with the realization the tension may not diminish oil production in either country. Some analysts argue the contrary — the strife in the Middle East could actually exacerbate the global oversupply of oil which has driven prices down during the last 18 months.

“Short term, we think this worsens the supply issue,” said Bill Harris, a partner with Avenue Investment Management. “Saudi Arabia is motivated to financially damage Iran, so if they pump more oil that can lower the price and that does more harm to Iran that in it does to Saudi Arabia.”

At the same time, Iran could boost its own production to generate cash.

In the last decade there has been plenty of turmoil in Middle East, but Harris said rarely does it actually impact production.

The latest crisis was sparked by Saudi Arabia’s execution of a prominent Shia cleric and opposition figure. In response, demonstrators set fire to the Saudi embassy in Tehran. Since then, allies of Saudi Arabia followed the kingdom’s lead and downgraded diplomatic ties to Iran.

As tensions rise, the divisions inside OPEC grow wider. The oil cartel has been under pressure since prices began to tumble in 2014, leading some to say the cartel is falling apart.

“It’s absolutely over,” said Harris. “We started seeing it about a year ago when the U.S. started speaking to Iran about going in together to fight ISIS in Syria and that was the first time in 40 years..the faction was always the U.S. and Saudis against Iran, now that line is blurred.”

“The Middle East is divided and there is no OPEC for the time being.”

That belief is shared by Greg Priddy, who follows OPEC for the Eurasia Group.

“This underscores that there are differing interests between different members of OPEC and getting effective cartel behaviour back into play is almost unthinkable at this point,” said Priddy.

There is the potential for further conflict in the area as prices remain low causing financial headaches for countries heavily reliant on crude revenue. Algeria, Venezuela, Iraq, and Oman are all in financial trouble.

“The Persian Gulf region is in a state of flux,” said Jim Krane, who follows energy geopolitics at Rice University. “We’re seeing the Saudis take a bit more of a forceful role, they were kind of quiet players in the past. They tended to pursue diplomacy behind closed doors.”

The Saudis are in a stronger financial position than Iran to withstand low oil prices, said Krane.

“They feel pretty confident that they’ve been there and can do it again.”