You are here: Home / Mediterranean / One year on, UN-backed government fails to unite Libya 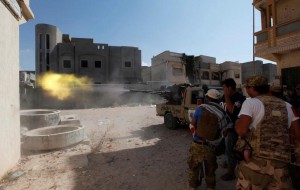 Libya’s internationally recognised Government of National Accord (GNA) marks its one-year anniversary on December 17, but few among the population will be celebrating.

Twelve months after representatives from many of the country’s myriad factions declared the formation of the GNA at a conference in Shkirat, Morocco, the country remains as divided as ever.

Eastern Libya, home to the bulk of oil production, is under the control of a separate government appointed by the national parliament, the House of Representarives (HOR), which is based in Tobruk. Meanwhile the capital, Tripoli, is wracked by militia violence, with the GNA still in the process of forming its first security force, the Presidential Guard.

However, GNA supporters point to two key signs of progress in a country which has known nothing but chaos ever since the overthrow and killing of Muammar Qaddafi during the 2011 revolution.

First, on December 7 Libyan forces aligned with the GNA captured ISIL’s main base at Sirte after a bloody six-month campaign backed by American air strikes.

Secondly, oil production has begun to improve after the commander of the HOR armed forces, Field Marshall Khalifa Haftar, captured four key oil ports from a militia in mid-September.

Both these triumphs are conditional. While ISIL extremists have lost Sirte, it is believed that many fighters remain in Libya.

America’s special envoy to Libya, Jonathan Winer told the joint congressional foreign affairs subcommittee on November 30 that ISIL could cause more trouble unless Libya’s divisions healed. “If Libyans choose to fight each other instead of uniting they risk increasing the probability that ISIL and other violent extremists in its mould will be back,” he said.

Meanwhile, although oil exports increased from 330,000 barrels a day before Field Marshall Haftar captured the ports to 600,000 now, he refuses to take orders from the GNA. Instead, the field marshal remains loyal to the HOR, which refuses to sign the Libya Political Agreement (LPA), a transitional constitution under which the GNA operates.

On Friday, HOR president Agila Saleh, visiting Moscow, announced that far from joining the GNA, the parliament would soon propose a “road map” to an entirely new form of government.

One year ago there was optimism in the air when Libya Dialogue, a commission of Libyan representatives chaired by the United Nations Support Mission for Libya (Unsmil), announced the GNA, appointing as prime minister Fayez Al Serraj, a Tripoli politician and businessman. It was Libya Dialogue which drafted the LPA under which Mr Al Serraj leads a nine-strong presidency.

This is where things have become deadlocked. The HOR has refused to endorse the GNA or the transitional constitution, demanding that it, not the GNA, should appoint the commander of Libya’s army – signalling its determination to keep Field Marshall Haftar in that role. But he would not be acceptable to all. Though popular in eastern Libya for his campaign against militias in Benghazi, many factions in western Libya dislike him.

Meanwhile, the GNA faces a challenge in Tripoli from the National Salvation Government, which ruled the city until the GNA arrived on March 30. On October 15, salvation government prime minister Khalifa Al Ghweil led a group of militias in capturing a government complex around the city’s Rixos Hotel, leaving the city divided, with some militias backing him, others the GNA.

Amid the chaos, Tripoli is suffering power cuts and cash shortages, with long queues forming outside the few banks still distributing money. In October, the World Bank warned that the economy was at risk of “collapse”.

The Unsmil chief Martin Kobler, a German diplomat, acknowledged the difficulties telling the UN security council on December 6, “Although the Presidency Council resides in Tripoli, the Government of National Accord has limited authority.”

Mr Kobler is determined to keep talking to all sides, assuring the security council: “I am convinced that the Libyan Political Agreement remains the one and only viable framework. It is without alternatives.”

For the moment, he has widespread international backing. As well as the UN, the Arab League and African Union all support GNA.

Two weeks ago, American envoy Mr Winer told congress that America remained at the forefront of efforts to “broaden support” for the GNA. However, with a new president entering the White House, that commitment cannot be taken for granted. The GNA’s task as unifier in Libya may be about to get even harder.