You are here: Home / Europe / One year after Barcelona Islamist attack 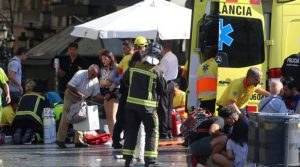 One year on from the attacks in Barcelona and Cambrils, in which 16 people died and 137 were injured, the General Directorate for Support for Victims of Terrorism (Spanish acronym: DGAVT), under the Ministry of Home Affairs, continues to receive applications for aid and remuneration. Provisionally, 130 files have been processed out of 407 received, and the State has allocated 9.8 million euros in remuneration and aid to victims, like reported by eurasiareview.com.

According to the Spanish government, a person may have more than one file open, for example, one for injuries and another for psychological aid, and hence the number of files is greater than the number of people affected by the attacks. In addition, quite a number of those injured were put on sick leave and hence are subject to the corresponding evaluations before going back to work. The same is the case for those affected psychologically who still do not have a diagnosis accrediting the long-term effects. In these cases, recognition as victims may take time, although these people are already receiving specific help. In total, 70 people have already been legally recognised as victims.

That said, attention for victims has been unceasing and took effect immediately as from August 17 last year. In the same afternoon as the attack on Las Ramblas de Barcelona personnel were activated by the DGAVT. Early on the morning of August 18 a team traveled to Barcelona, principally made up of social workers with more than 15 years experience in attending to victims of terrorism.

The team stayed in Barcelona continuously until August 31. During this time they attended to those injured and their families. Their tasks included support at the Forensic Medicine Institute of Catalonia, receiving inbound family members at the airport and collaborating with consulates and embassies for repatriation purposes. All of those injured who were taken into hospital, except those who were discharged in under 24 hours were visited at hospital and the accommodation and travel needs of their families were catered for.

Furthermore, from August 22 to 29, a DGAVT Office was operational at the Government Delegation in Catalonia. Victims and their families, as well as consulate personnel were informed in person about issues of attention, including help in presenting compensation applications. After this office closed, the information and attention for victims continued directly from the DGAVT, which coordinated relations with consulates and embassies, the insurance consortium and associations and foundations for victims of terrorism.

Once the immediate attention phase concluded, each family member of the victims and each injured party was assigned a DGAVT social worker, who concerned themselves with providing individualised monitoring, attending to their psycho-social needs and supervising their psychological situation in order to propose their referral to a professional, always subject to the victim’s agreement.

Over the course of these months, those injured and the families of those who died that are resident in Spain have received home visits. The DGAVT personnel also made many phone calls to monitor progress and managed bureaucracy with other public authorities and health services to ensure victims received the right attention, with more than 700 actions of this type taking place.

In addition to the immediate psychological assistance provided by the different authorities involved, the Ministry of Home Affairs took on the ongoing psychological attention of 28 people affected by the attacks through the National Network of Psychologists for Attention to Victims of Terrorism.

Of the 16 people killed in the attacks, 12 were awarded the Grand Cross, thus recognizing them as victims of terrorism. Four of those who were killed did not receive this award because their families have not presented the application to date or they have not provided their consent to process this ex officio.

Citizens of 34 nationalities were affected by the attacks, according to the list provided by the Regional Government of Catalonia. Of the 16 people killed, 10 were foreigners, five were Spanish and one held dual nationality. Of the 137 people injured, 105 were foreigners.

Those injured and the families of the victims who returned to their own country immediately were informed of their rights, either directly or through their respective consulates.

Those affected were also offered payment for all psychological therapy not available under their own healthcare systems.

The DGAVT personnel answered in writing or by phone all those queries raised by foreign victims and those injured on how to process applications, the accreditation of their presence at the location of the attack, the deadline, the documents that must accompany them and the procedure for processing files. In some cases, these queries were channelled through embassies and consulates in Spain of the countries of origin of the victims.

As regards possible legal action, those foreigners affected were informed by letter of the proceedings opened in the National High Court, and that the Public Prosecution Service of this court was the body in charge of their representation and hence it was not necessary to appear in person.