You are here: Home / West Asia / One security force, 2 gunmen killed in hospital attack in Afghanistan

Terrorists have stormed a hospital in south Afghanistan, killing a security soldier before being shot to death during an exchange of fire 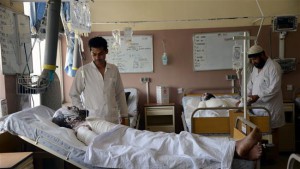 According to Afghan officials, the incident occurred on Monday when two assailants entered the hospital in the country’s southern provincial city of Kandahar, starting a gun battle with security guards in the regional health center.

Reports said one member of the security forces was killed along with the two attackers.

Provincial governor spokesman Samim Khpalwak said the target of the attack could have been the deputy governor who was intending to visit the hospital.

The medical facility provides health services to war victims, including members of police forces and the Afghan army.

No group or individual has so far claimed responsibility for the deadly assault, but such incidents are mostly blamed on Taliban militants who frequently target official buildings and security forces in the war-ravaged country.

Afghanistan has been gripped by insecurity since the US and its allies invaded the country as part of Washington’s so-called war on terror in 2001. Many parts of the country still remain plagued by militancy despite the presence of foreign troops.

Taliban militants have regrouped since the death of former leader Mullah Akhtar Mansour earlier in the year and are reported to be currently in control of some areas in Afghanistan.

The United Nations Assistance Mission in Afghanistan (UNAMA) says it recorded 1,601 civilian deaths and 3,565 injuries in Afghanistan in the first six months of 2016.