You are here: Home / Europe / “One of most radical Islamic State women comes from Kosovo” 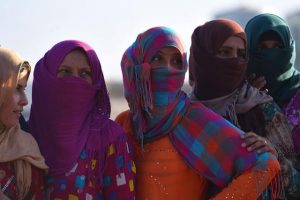 A total of 44 women from Kosovo are in the ranks of Islamic State in Syria and Iraq, while 60 come from Bosnia-Herzegovina, according to Kosovo Center for Security Studies.

The best known Albanian woman from Kosovo and Metohija that has joined the terrorist group is Qamile Tahiri, who 23 years old.

Currently, according to Kosovo-based press, she heads the training camps for women jihadis in Syria, and is considered one of Islamic State’s most radical women-fighters from this region, writes Sputnik.

Under her patronage, dozens of Albanian women from Kosovo, Albania and Macedonia, have joined Islamic State. Her right hand is Laura Husseini, also from Kosovo and Metohija, who has brought both her husband and her brother to this group.

The role of these women is not merely to be “the jihadi brides,” as is often thought, but is instead “much wider and more important than participation in the fighting – it is primarily to recruit new members from around the world, mainly via the internet.