You are here: Home / MidEastGulf / One Hezbollah fighter, 13 rebels die in Zabadani clash 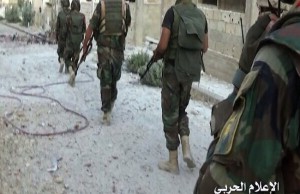 Hezbollah and Syrian army forces Wednesday advanced further into a northwestern region of a Syrian border town which has been the scene of fierce fighting over the past week, a source told The Daily Star.

The source, who is close to Hezbollah, said at least 13 Syrian rebels and one Hezbollah fighter were killed in Wednesday’s clashes in the resort town of Zabadani, located just 8 kilometers from Lebanon’s eastern border.

The clashes come one day after Al-Manar TV reported that residential areas had fallen to Hezbollah and the Syrian army in Zabadani’s northwestern neighborhood of Zahra.

The report also said Hezbollah and the Syrian army took control of several positions that militants had previously used to launch attacks.

Two Hezbollah fighters were killed in Tuesday’s fighting, according to The Daily Star’s source. Wednesday’s death brings the party’s overall death toll in the battle for Zabadani to seven.

Hezbollah and the Syrian army’s offensive in Zabadani is largely considered an attempt by the two allies to bolster their control of land routes between Lebanon and Syria and cut rebel supply lines.

The capture of the town would add to Hezbollah’s recent major field victories, which saw the party take large swaths of the Qalamoun hills since its offensive, backed by the Syrian army, began in the region last May.

The decision to launch the offensive in Zabadani came after negotiations with rebels failed to secure the militants’ withdrawal from the area, which is located 50 kilometers northwest of Damascus and 12 kilometers northeast of Lebanon’s Masnaa border crossing.