You are here: Home / MidEastGulf / On to Raqqa: another Mideast war front with U.S. troops at risk 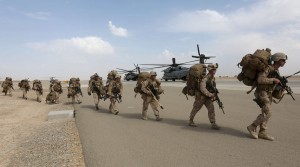 Far from the concussions on the U.S. domestic political playing field, American troops remain engaged in active combat, including on battlefields in faraway longstanding wars in Afghanistan, Iraq and Syria.

Two U.S. soldiers were killed last week in Kunduz, in northern Afghanistan. That war has now continued for 15 years, with America taking casualties and difficult-to-define success still no closer at hand. The Afghan government in Kabul remains disastrously divided, propped up by American money and troops, and increasingly threatened by Taliban advances across the country.

In Iraq, the battle to take back Mosul from the Islamic State continues, with completion nowhere in sight after 25 days. On the side of the U.S. troops engaged there are Iraqi government forces, Shiite Muslim militias laced with Iranians and independence-minded Kurdish forces.  It is reported that the array of forces we are supporting there are “advancing” into Mosul. Civilians and others are certainly fleeing the city. IS forces are fighting back hard — that is, those of them who have not simply slipped away from the city.

A third site where U.S. forces are again serving in an in-principle supporting role in combat is Raqqa, in the Syrian desert  near the Turkish border. Defense Secretary Ashton Carter announced in September that Americans would be involved in the attempted capture of Raqqa, another IS center. It and Mosul were to be taken from the IS before the U.S. elections, but those October surprises did not occur. Now, it is reported that an attack on Raqqa has begun, led by Syrian Kurdish forces backed by American military assets.

The problem with U.S. support of the Syrian Kurdish role in Raqqa is that nearby Turkey is resolutely opposed to it. Turkey is concerned over the impact on its own restive Kurds, an estimated 25 percent of its population. Turkey is a longstanding important NATO ally.

It may be that a Trump administration can put some logic into policy regarding the devil’s brew of U.S. Middle East wars. It would be a challenge to anyone to untangle that mess, but he will have to try.  The alternative is years more of basically pointless, expensive conflict.