You are here: Home / MidEastGulf / Officials of Turkish National Intelligence Organization (MIT), confessed about how Turkey supported ISIS and Al Nusra in Syria

MIT’s Erhan Pekcetin and Aydin Gunel who were captured by HPG last year, spoke about how Turkey supported ISIS, Al Nusa and so-called Free Syrian Army. KCK released the confessions of Pekcetin and Gunel who described how MIT organized camps and trained ISIS and Al Nusra members inside Turkey, like reported by anfenglish.com. 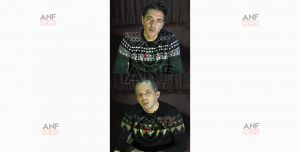 MIT official Gunel said that MIT Special Operations Office deputy director Kemal Eskintan is responsible for coordinating relations between the organization and the gangs. He also gave information about a meeting in Antalya with gang members which was attended by Hakan Fidan, director of MIT.

MIT administrator Erhan Pekçetin spoke about the special white Mercedes buses and trucks bought by the MIT for gang members, weapons and explosives that were sent to Al Nusra and ISIS. MIT administrator Pekçetin said these vehicles bought for the gangs were kept in the MIT central headquarters.

“We have white Mercedes buses, these were bought. We didn’t have them in the organization, they were bought. There are 7 or 8 f of them. They are kept in the headquarters. They were side by side with the MIT trucks in the headquarters. The trucks carrying the equipment, weapons and ammunition were also in the headquarters. They were there in 2012 when I came. I saw them go in and out, fully loaded, at midnight. It actually drew attention that they were leaving the central site in the headquarters at midnight. The Yenimahalle Campus of MIT isn’t that independent. There are buildings next to each other. It’s not a place where trailer trucks can maneuver. There are gaps where there are buildings. It’s not a place where trailer trucks can exit. After a while, those trucks and buses were taken away from the headquarters. The newspaper Sözcü photographed those trucks. They took photographs from Google and wrote that they ‘draw attention’. The trucks and buses were drawing attention. I’m guessing they rented or bought a space in Pursaklar. A friend of mine mentioned that. I believe the weapons, ammunition, trucks and buses are kept there. Because that makes sense. That place is very close to the airport, Pursaklar is 3 or 4 km to the airport. If there is equipment coming in, if military equipment is brought by air from abroad, it can be handled in a very short time without drawing anybody’s attention.”

MIT MEMBER AYHAN ORAN WAS ABDUCTED AND QUESTIONED BY THE MIT

MIT administrator Erhan Pekçetin said the MIT has many special questioning houses in many cities including Ankara, and spoke about the FETÖ Department set up inside the MIT. Pekçetin said MIT administrator Ayhan Oran, who had been involved in the planning of the Paris Massacre and had more recently disappeared due to his ties to the Gülen movement, was abducted by the MIT itself and gave some important information about the matter:

“We also used the Special Activities Questioning Campus. As the GİB (Güvenlik İstihbarat Başkanlığı – Security Intelligence Directorate). One day later, the FETÖ Department brought in a man. It’s a small place, with 3-4 cells. Then there is the protection area. After the man came in, the GİB Director called us and said, ‘Stay quiet, don’t raise your voice. And turn the cameras off.’ There are cameras that look over the cells. I guessed that this was a member of the organization. I thought it was a man who shouldn’t hear our voice or see our faces, and the cameras were turned off so we wouldn’t see him. But I did see him. It was Ayhan Oran, who organized the Paris Massacre along with Uğur Kaan Ayık and Oğuz Yüret. Ayhan Oran is bow-legged, because he plays football. Later on, the press got a hold of this, and started asking ‘Where is Ayhan Oran?’ anyways.”

QUESTIONING HOUSES OF THE MIT

“That place hadn’t been used since 1999. Cleaning, preparation and other efforts were completed, and we had that place opened. There are questioning houses in the headquarters in Van, Istanbul and Diyarbakır too. We don’t have the authority to detain people. There are operatives in the İKK (Counter-Intelligence Unit) who have the authority to detain people, but if anybody else does it, that is illegal. So they do it quietly, without the public hearing about it, and then they release the detainees. They could be offered a position, or the department decides according to the questions and answers. Usually, people are taken in so they would be offered a position. We used to use the Special Activities Directorate offices, this is what I can say now about the campus, the budget, and the buses.”

MIT administrator Erhan Pekçetin said ISIS members were interrogated in the special questioning houses and the Turkish state used them as they wished. Pekçetin gave some examples:

“The Special Activities Directorate campus is outside of the Yenimahalle campus, it’s outside the Anadolu Boulevard, it used to be called The Farm. They don’t have the authority to detain people. In the MIT, no department outside of the İKK has that authority. And the İKK Directorate has the authority to take people in on accusations of espionage and prepare summaries. No other directorate has the authority to detain people. At the time, the Special Activities Directorate didn’t either. But they took people in illegally, questioned and released them. Their equipment was better. I saw a young ISIS member there. They said, ‘We took this one in from Syria, he is an ISIS member.’ It was a young man, 25-26 years old. From Iran. They took him to Kars by plane and he was to be taken to Doğubeyazıt to be handed over to Iran. But what Iran gave in return, how he was handed over, if Hakan Fidan did it as a gesture to Iran, I don’t know. I don’t know if the Iranian ISIS member was handed over. Did the Special Activities Directorate take him in under war conditions I don’t know. Because I know that they do take people in under other circumstances. They took in a source in Hatay, and he was released after they figured out he was a source.”

AL NUSRA AND ISIS MEMBERS TRAINED IN CAMPS IN HATAY, ANTEP AND URFA

MIT administrator Erhan Pekçetin pointed out that the MIT Special Activities Directorate, which provides gangs like Al Nusra and the FSA with members, ammunition and training, has a high budget:

“Their budget is also very high. Because their activities are very special, their budget is high. Buses, trucks, weapons, FSA members going in and out happens through camps. The camps in Hatay, Urfa and Antep have been in the press a lot. There are camps where MPs aren’t allowed in, I believe the activity could be in one of those. Our guys (the MIT) organize the going in and out. It’s the Special Activities that organizes this. No member of the organization ever used those trucks. The white Mercedes buses were never used, even though they were in the headquarters. I know of those. And I know that the Special Activities has a very high budget because of this.”

MIT administrator Pekçetin said the MIT budget was increased for supporting the ISIS, Al Nusra and FSA gangs and continued: “When Hakan Fidan started, the MIT budget was around 410 million dollars. Right now, I know that the MIT budget is around 1.100.000 dollars. This is a serious increase in just 4-5 years. And I think this is due to the Special Activities department. Of course there is the new campus under construction. A campus outside of Yenimahalle is being built, I don’t know if that is included in the budget.”

MIT administrator Erhan Pekçetin provided important information on the Mosul operation by ISIS and Turkey in collusion and continued:

“Other than that, other than the Special Activities’ contact with Al Nusra and the FSA, in the ISIS raid on the Mosul consulate and the Mosul consulate officers being taken hostage… I understood that they played a role in intervening and contacting ISIS for the release of the hostages in the Mosul consulate. Because Kemal Eskintan was given an Outstanding Achievement certificate. I was there. Hüseyin Şirin and Kemal Eskintan received certificates. Hüseyin Şirin was the Iraq Department Chair in the DOB (Dış Operasyonlar Başkanlığı – Foreign Operations Directorate) at the time. As they turned and passed in front of us, Director Levent asked, ‘What tricks did you pull do to receive this?’, and he said, ‘No, this is for the Mosul operation’. That was when I heard of it from him, that Hüseyin Şirin and Kemal Eskintan were on duty in the rescue of the hostages in the Mosul consulate. For that, either directly or indirectly, there was a negotiation with ISIS. Then it was understood that the hostages in the consulate had been rescued. I believe these were their contact with ISIS members.”

THE STATE COVERED UP THE DEATH OF 4 MIT MEMBERS

The MIT administrator also said the MIT met with ISIS for the officers in the Turkish consulate in Mosul and added that in an explosion in a bus sent by the gangs to Efrîn, 4 MIT officers were killed but the state covered up this information:

“On top of these, I would like to add some things to the Mosul Consulate raid by ISIS. The activities of the Special Activities Directorate during the FSA transports weren’t on the press so much, but it was all over the Internet. There was a suicide bombing on one of our Mercedes buses that were taking FSA members to Efrîn. What I heard is a friend from Izmir was martyred in that attack, I used to love that guy. He was a tall, handsome man. One driver and two guards, and 3 or 4 operatives were martyred. Apparently, they saw the bus, the friend had a list, and when the ISIS suicide bomber wanted to get on the bus he told him his name wasn’t on the list. He didn’t let him on the bus, and he told him. So the ISIS suicide bomber detonated himself by the door. He detonated himself before he could board the bus. If he had gotten on the bus, the casualties would have been much higher. There were 3 or 4 martyrs. And some casualties from the FSA members. I even saw a photograph, the trunk doors were blown open on the sides. If he had detonated inside the bus, the glass would have been shattered. You can tell that the bomb exploded outside. From the Special Activities and in general from the organization, there are not many martyrs. But that was one of the rare incidents when there were several martyrs at one time.”